How Moby and Kubernetes work together

There have always been close relations between the Moby open source projects, led by Docker, and Kubernetes, since Kubernetes was launched at DockerCon 2014. The Kubernetes and the Moby communities often include the same people, attending the same meetups, using the same languages and design patterns, and trying to solve the same problems. The containerd project was started last year in collaboration with all of the major cloud providers and has worked with the Kubernetes community to provide an open and reliable container runtime for higher level orchestration projects and container platforms, including Kubernetes.

This page summarizes how each Moby Project integrates Kubernetes and how to get involved. 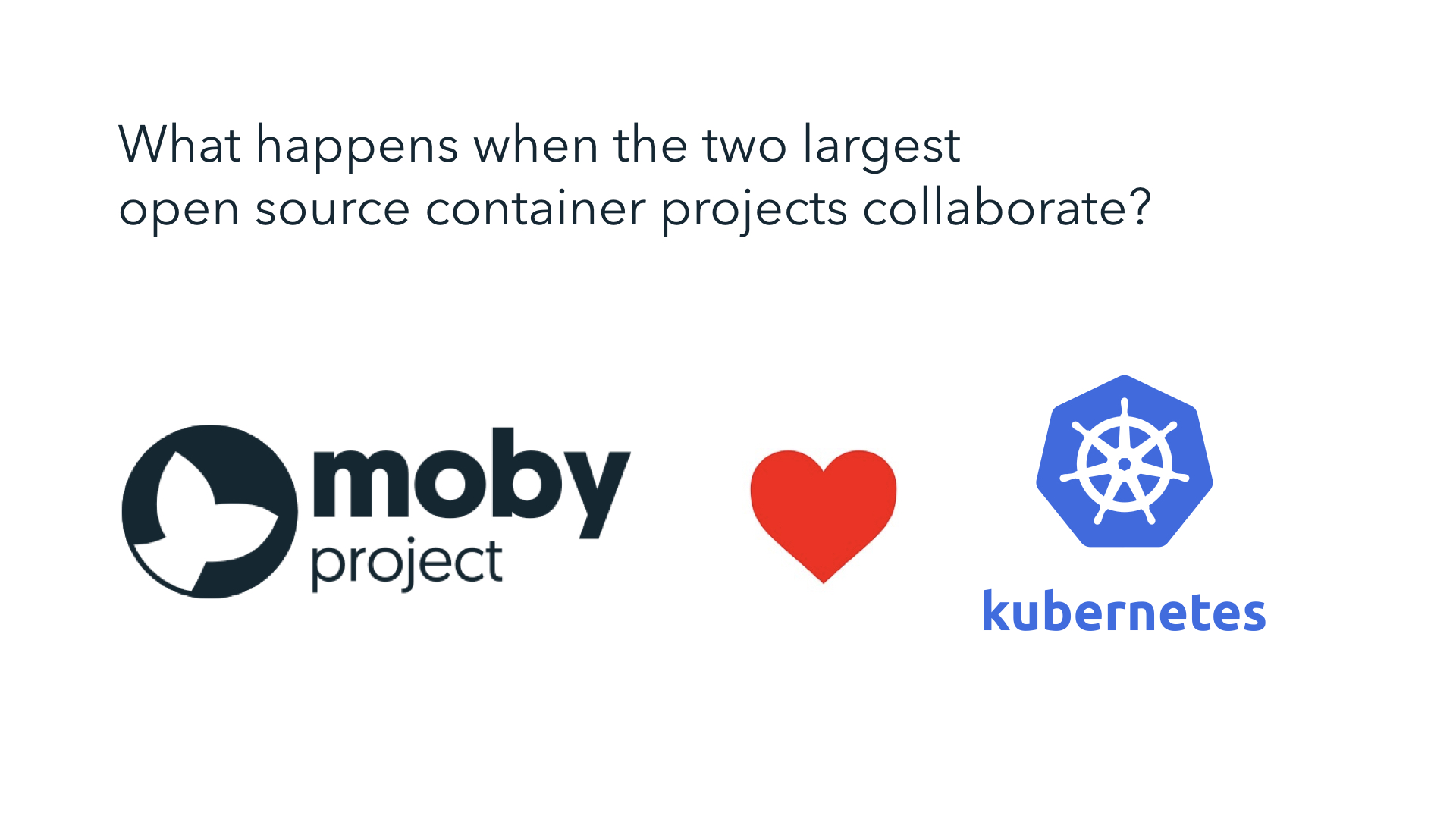 The containerd project was designed to be used as the core container runtime for future editions of Docker, Kubernetes, and many other projects. The project is currently approaching the 1.0 milestone.

To use containerd with Kubernetes, you need to use the cri-containerd CRI (common runtime interface) adaptor. This is currently largely feature complete, and works with Kubernetes 1.7 or later, and is in the final stabilisation process. There are outstanding issues that need help and you can find out more on the cri-containerd issue tracker. Any bugs you find should be reported there too. Below are slides from the recent Moby Summit in Los Angeles, which cover the Kubernetes containerd integration by Liu Lantao.

There are several ways you can set up a Kubernetes cluster with containerd and cri-containerd:

You can join the discussions on the #containerd channel on the Community Slack.

LinuxKit is a tool for building custom secure, portable and lean operating systems for containers. It was launched at DockerCon 2017 with a demo of Kubernetes, and has continued to improve this support since then. There is a detailed set of getting started instructions for both Kubernetes with Docker and with containerd. This can be customised further as required.

You can join the discussions on the #linuxkit channel on the Community Slack.

You can join the discussions on the #infrakit channel on the Community Slack.

Support has been submitted to libnetwork to make it a CNI provider, the base API for Kubernetes network drivers. This enables all the existing Docker network drivers to work with Kubernetes

Kubernetes has merged alpha support for IPVS based L4 load-balancing using the IPVS library support in libnetwork developed originally for Docker Swarm, which was extended for the Kubernetes use cases. For more information, see the pull request at kubernetes/kubernetes#46580.

Notary aims to make the internet more secure by making it easy for people to publish and verify content. It is used for signing and verification of containers by Docker and other container projects. Both Notary and The Update Framework that it is based on are in the process of being donated to the CNCF and there will be further direct integration with other CNCF projects, such as Kubernetes, soon.

You can join the discussions on the #notary channel on the Community Slack.

This is a work-in-progress library to support a common high level security entitlement interface for Docker and Kubernetes, a similar type of interface to Apple’s entitlements for macOS. It is being developed in conjunction with the Kubernetes community.